Drinking Games for Two People - getting drunk with a close friend 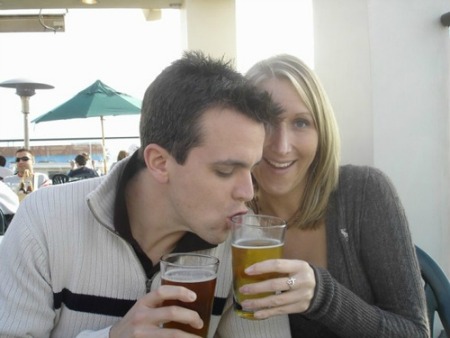 Drinking games for two people? Are you serious? Those were the questions that I instantly bloated out after hearing my best friend say it.

One thing that is going through my mind after hearing that was how boring it would be. Two people, one is problematic, a six-pack and the backyard - see? Boring, right?

However, I think my best friend was determined to be proving that he is

almighty that night so I was left scratching my head after the night was over. So let me recollect how ashamed I was and share with you some of the games he had prepared that day.

What I did recall was that we played with cards that night. However, I can't recall what is called so let's name it like the classic drinking card game War. It is actually played in the same way as the card game, but whoever have the lower number will be required to drink the beer.

With a deck of cards that was divided into two, I never would have thought that it could be possible to play drinking games for two people only, happily drinking your worries away!

Buzz is the other game he taught how to play that day. It goes by:

Flipping a quarter into a cup was one of the many games he showed me. While it was a very simple game, it proves to be an entertaining one as we did have trouble of flipping the quarter. Until this point, I can't figure out if it was the quarter's fault or our own drunkenness.

The game is played by flipping the coin into the cup and whoever failed to shoot his quarter into the cup will face the punishment of drinking the agreed upon amount of drink.

Yes, the interesting part of this drinking game for two people is the frustrated faces of your friends as they try with all their might to make that quarter reach the cup.

So yeah, I was wrong with my instant judgment. My friend did prove that through creativeness, drinking games for two people are possible. Make that very much possible to happen. Now I know that having a buddy around is more than enough to get drunk and be totally suffering from a hang over the next morning!