They say that good things come in pairs. But, is this philosophy applicable in drinking? 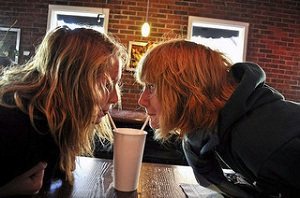 Can a drinking spree with just two people level up to a night spent getting drunk with a big group of friends?

Is it possible that drinking games will be as exciting when there are only two are drinking? Here are some examples of two people drinking game that might interest you and I'll let you judge if they can be at par with games played with the whole gang.

Best buds who can't get their hands off their cards should try the game Red Means Go, which is not only recommended but a must for you to play. These are the following facts about the game:

Red Means Go is a good game to play if you want to get drunk instantly!

For those who really have nothing but loads and loads of beer lying around, never fret as there is a two people drinking game called buzz that may be perfect for you two.

It only requires you two to say the word "Buzz﻿" as a replacement for any number divisible of 7 when counting. For example, I would go first by saying "one" then my buddy would say "two" and we will continue till seven which we should replace with the word "buzz" or else we will suffer the consequence.

If you are left with only a dice lying around, Rolling Math is the answer for your happiness! A very simple game with an easy mechanic that is sure to leave boredom out of the room.

Yes, it truly is a different experience when the group is larger as each has his own craziness to contribute to the night's laughter. But, there would be times that it is best for two people to share things and experiences between themselves. In these times like this, a two people drinking game will be more than enough to fill in the gap left by a large group's laughter.