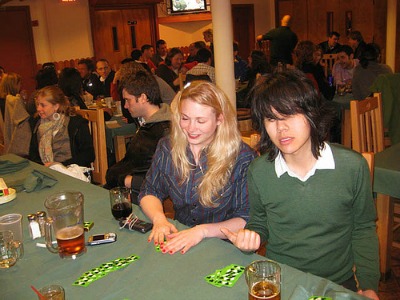 Drinking card games are highly popular in US colleges and at any party! Combine different games and a good refreshing drink or three.

Pick any of the following games to get the party started!

One of my favorite drinking card games is called Beer poker-shot ante. It is easy: you just need

The dealer deals and everyone antes a shot glass. The betting rounds and rules are the same as Texas Holdem - only instead of betting chips or money, you bet shots.

After the hand is over, the winning hand doesn't drink any. Whoever folded or lost in a showdown has to drink the amount of shots they put in.

You best play it with 4-9 players: if you have only 2 or 3 players, the game might only last 20 minutes till someone passes out!

Don't know how to play Texas Holdem? Learn from this video:

Beer poker-shot ante works exactly the same. Only difference: you will bet shots instead of chips.

Make sure to stay safe, and try not to pass out, and definitely DON'T drive home after one of these games.

Another fun and simple drinking card game is Black and Red.

You play Black and Red by choosing one player to start. He must guess if the next card in the deck is a red card (heart or diamond), or a black card (Club or Spade).

The game goes on until everyone is done with the stack of cards, there is no time limit.

Why drinking games are so popular

How about Ace of Spades

It's one of the most traditional games. 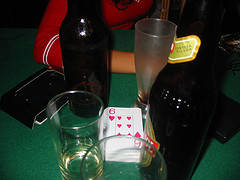 A classic: combine the suspense of Poker with the party atmosphere of drinking games! Just play poker: instead of betting on money you can bet

If you play with a pot, you can have everyone pour drinks in a big mug instead of betting chips. The losers has to down all. Careful with mixing different drinks!

Or maybe not, if you want to really punish the loser!

The last game in this series is called "Bullshit".

You deal out the entire deck to the players. They take turns placing down a certain number of cards face down with decreasing card. 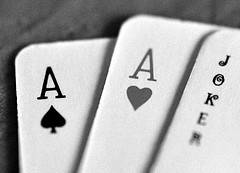 If you start with Aces and someone claims to have 3 aces they can put that many cards down.

Some vary the rules and double the amount of drinks for the liar.

The amount each person has to drink varies depending on how many people are playing and how much alcohol you can handle.