Dice Drinking Games - Get Them Rolling! 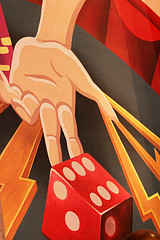 Get some dice, grab plenty of beers or even a keg and let's celebrate the night away. Wait - "what's the dice for?" - you ask. A night full of alcohol and we need a die? Are you already drunk? These may be some of the questions you have in your head after hearing the word dice. But, don't you fret as I am still not drunk and the dice; well we will be using it to play dice drinking games. This will be a new experience for the group that is more used to the traditional things people do when they get together with friends.

Drinking has been usually associated with ranting about everything you hate about life. Tonight let's try some new flavor to this traditional friends' get-together, so that we can still unwind without being too negative about life. The first game we can try requires each member of the group to have their own die.

So stop questioning if you want to get drunk! Grab a dice and let's get the drinking started with these fun and stress-releasing dice drinking games!