My Crush Played Sexy Truth or Dare with Several Guys, Should I Still Go for Her?

A game of Truth or Dare can get really flirtatious...

Not long ago, we went to this party and the girl I had a crush on went too. I have confessed to her before and she told me that she likes me too so I was really excited.

When we went to the party, we all had something to drink and were having fun and then one guy took out his smart phone where there was this Truth or Dare application. We all took turns in playing some sexy and adult dares and soon many of us had removed most of their clothes.

After some time, there were some kissing and touching dares going on and my crush was making out and touched by several guys already. At that point I was feeling pretty jealous, but the worst part was when she was asked a Truth question.

She pointed out two of guys of whom no one was me. In the end the party went really far and she had made out with almost everyone and I am really confused, if I should still go for her? What should I do???

This one is a pretty hard question. Normally, I am all for going crazy with truth or Dare. People should not take messing around with each other so serious when playing truth or dare. 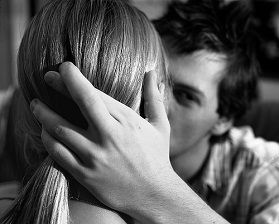 Photo from Katie Tegtmeyer)
A normal couple has to think about if kissing is cheating, but you are not the boyfriend of the girl yet and normally I would encourage you to go after her...

But seriously: how many guys has she been making out with? And did she ever see if you OK with that. Just imagine her being your girlfriend... Do you think she would stop doing this even if she was together with you?

I am not saying anything judgmental about her. She can do whatever she wants, but I still think that this is probably not the right girl for you. From what I see you are looking for a sweet girl to have a crush on and this girl just wants to have some fun.

You also have to take care that there is a very possible risk of catching some disease if she is fooling around with many guys at once. Things like this can happen and will happen even if people don't talk about it.

Seriously, as fun as the truth or dare game night has been with some adult and sexy dares, don't lower your standards for that.

Perhaps you will find this article also useful:

I hope this answered your question and if you, or anyone who reads this post, have another question related to a situation like this, please feel free to comment below and I will answer as soon as I can.