(Photo from hrlndspnks via flickr)
I was in my 4th year of engineering when this incident, which I am going to explain had happened. My roommate was interviewed at least 10 times in campus for recruitment and was not able to clear a single one.

At last he got selected in MNC and forced to throw a party. We were 10 to 12 in numbers and went to an open space restaurant. I was an amateur drinker used to drink only beer and had tried whisky couple of times only. 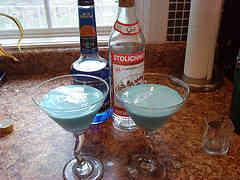 Mixed Several Drinks like a Cocktail
(Photo from stallio)
Since he was my roommate and I was in full zoom and was equally excited on his success. Among 10-12 people only 7-8 people decided to drink (rest of them had never tried before) so we started with beer.

Suddenly all decided to jump to the next level and drink Vodka. In that situation I was not in a position to think of stepping back and had to accept this invitation. I could have been in control, but they mixed 2-3 brands and added a nominal amount of water.

So it was a kind of neat drink and I had hardly three pegs, took some Bar-B-Q food in between to mix up the taste because it was so bad because I was totally unfamiliar with it. That was the end of the party for me. 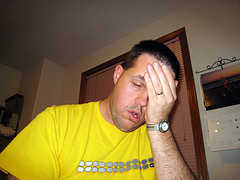 Hangover after Drinks
(Photo from Mr.Thomas via flickr)
I lost my control and vomited all the food I took; my friends gave me some Lime juice to dilute the alcohol, but didn't work. Finally couple of my friends left their dinner decided to drop me home, but unfortunately it started raining heavily.

Nevertheless, that could not stop them to carry me and took me on bike and I was like a sandwiched between my friends on bike. We reached home around 12.00 mid night.

I got up at 12 in the noon next day had some juice as I still had the headache due to the last night stunt.

I won't forget this incident, decided that drinking is not a job for a person like me and left the idea from that day onwards.

The Appletini While in college Have you ever tried a nasty Appletini Drink?

My friend Carly and I were watching the Real Housewives of New York City on TV one night and the women on the show were drinking Appletini and looking very sophisticated. We were bored and tired of sitting on the couch, which we had been glued to all day.

So, we decided it would be a brilliant idea to make our own Appletini and spend the evening drinking them with our TV watching. We really wanted to spice things up a bit and add a touch of class to our night. Off to the liquor store/Rite Aid we went to gather our supplies.

Of course we had no recipe, but we assumed they were made of apple vodka and apple juice (duh). We decided it was best to purchase 99 Apples, "the 99 proof apple vodka." We returned home and began concocting our Tini.

The only pitcher of the house was in use, but we made it work by utilizing a giant Tupperware container (perfect!). We dumped in a bunch of vodka, apple juice, and ice, put the lid on and shook. Dreadful! We tried adding some sugar. It didn't help. Perhaps a splash of sprite? No. Tonic water? Eww. Maybe some lemon juice from that jar that's been in the fridge since we moved in? Wrong choice again.

Hangover after Drinking Appletini
(Photo from Mr.Thomas via flickr)

Inevitably, they were revolting and after a few terrifying sips we gave up and went back to our classless beer, realizing that we would never be as sophisticated as those damn Housewives.

Just then, our friend Kevin came in stumbling around after he had been at a party. Naturally, we dared him to try our rejected Appletini, which he did and loved, and proceeded to drink the entire Tupperware container. He spent the rest of the evening vomiting in the dirty bathroom basement and lying on the filthy damp floor.

Drunk Karen is the Best (Photo from huronbikes)
It was spring break my junior year of college, so I was 20. I was with my college club ultimate Frisbee team and we always traveled to Tybee Island, Georgia for a week long tournament with teams from all over the country.

The tournament was always a lot of fun every year and we had no doubt that this year would be the same.

We were staying in a house with the entire team (about 20 of us). We would play ultimate all day and then come home, take a nap, eat dinner, and spend the rest of the night drinking, getting rowdy, and hanging out with other teams.

One night we were all drinking and had a few other teams over to hang out. We all decided to play truth or dare while we were drinking.

One thing lead to another and we dared my teammate to run naked around the house. She protested a little but is pretty much down for anything and we finally settled on her running around topless.

We all go outside, cheering her on. She takes a long drag of beer, rips off her top and bra and starts sprinting towards the water (we were on the beach).

She runs around for a bit, kicking sand and doing cartwheels. We're all yelling and cheering and laughing.

She starts running back and we decide to make a tunnel for her to run through. We make two lines and lean over and touch hands with the people in the other line so we're making a tunnel.

She sprints back to us and heads towards our tunnel. She bows her head a bit and runs through the tunnel, grinning the whole time.

Drunk Karen is the best.

We were at my buddy’s house, let’s call him Rick, playing an edited version of truth or dare.

We weren’t necessarily asking each other “truth or dare” but rather telling each other “dude do this”. So I guess you could just say this game was all dares. Some background information: everyone is in college and ready to party.

So we are at Rick’s house and he tells me to go up to his neighbor’s house and ask them for beer or beer money since we are out. Rick lives in a residential neighborhood in Eugene, Oregon with families, retirees, etc.

Basically Rick is way out of place in this neighborhood. So it’s about 8 o clock and he tells me to do it, and me being under the influence go to his neighbor’s house knock on the door and ask:

“would you like to contribute to the life of college student?” neighbor is having dinner with his wife, but nonetheless invites me in.

He offers me some dinner with his wife, which of course I say yes because I’m not going to pass up a home cooked meal, and proceed to have dinner with this guy and his wife, all while intoxicated (I don’t think that he knew).

I had a nice conversation about where I’m from, what I’m majoring in etc. An hour or so passes and Rick calls me asking where I’m at and I tell him I’ll be back in a bit.

His neighbor says well we enjoyed having you and your welcome anytime blah blah blah, one must be pretty desperate to walk up to a random door and ask for charity.

He proceeds to reach into his wallet and pulls out a fifty and gives it to me. Being still a bit intoxicated got so amped up and excited and thanked and hugged both him and his wife. He walks me to the door and watches me walk across his lawn back to Rick’s house.

I turn back and get one final glimpse of the neighbor and he has this look of utter disgust on his face. Rick days later told me that he had had problems with that neighbor before calling the cops cause of noise and whatnot.

So when he told me to go talk to his neighbor he expected there to be some confrontation since a drunken college kid just walked up to him asking to support a part basically, not for the guy to give in and help fund it!

Why the Drinking Age is Above 18 (Photo from Mike Burns)
The night was young, and the city gleamed under a full moon a few years ago.

Me and my best friend Jon were traveling from one of the islands off of Miami Beach back toward our suburb of Kendall.

In our possession were two boxes of wine and a bottle of the cheapest vodka you could buy. As soon as we arrived at our friend’s place the festivities began. Shots of vodka and sweet gulps of red wine came together to form the inebriation to play beer pong.

After a few rounds of that game the party moved inside because in Miami it is always between 88 and 400 degrees. We decide in our drunken state to begin playing some drinking games. Monopoly, Jenga, Apples to Apples were being played simultaneously throughout the living room.

A small group of us including myself and my best friend go into another room. Lily looks over at me and says, “Javi, let’s play a game.” The tense room of people who look intrigued fell silent.

The only sound was the ticking of a clock on the wall. Jon looks at her and knows what is about to happen; round 1, truth or dare.

She looks over at me and asks the dreaded words which I respond dare, big mistake.

The next words came in a blur, “Javi, I dare you to jump roof off and get wet.”

After about three minutes of debate I agree. I do not exactly remember how I got onto the roof but next thing I know I am in spiderman boxers looking down at the pool feet below me.

For some reason, Jon was standing six feet behind me in his underwear as well which made no sense to my brain at the time.

Two seventeen year olds should never be drunk on a ceiling, they really just shouldn’t. I knew this was not going to end well.

So, logically, we grab each other’s hands and jump off the roof.

The water was ridiculously icey, then we surfaced. Apparently, the police really do not appreciate loud teenagers jumping off ceilings.

Lily kissed us on the cheek and then I woke up in the bushes a block away, wearing one of Lily’s dresses.

The details remain a mystery but the ongoing joke is that I have no recollection beyond that jump, but the story is always nice to tell.