Flaking out of truth or dare

When I was in sixth grade, we were at a party at my friend's house. Trying to get away from her parents, we ventured to a nearby field so that we could talk about things we were not comfortable discussing in the presence of adults.

We sat down and decided it was a perfect time to play truth or dare. The minute this suggestion was mentioned, my heart skipped a beat. I had a boyfriend, and he was not there. Boyfriends in sixth grade, however, meant that I stopped talking to him as soon as we started going out. Never kissed; nothing.

When the game came to be, someone dared me to kiss a very cute boy in the circle. I had no emotional attachment to my current boyfriend, but the thought of kissing a boy made me sick to my stomach. I had never kissed anyone, let alone in front of a group of my friends.

I just couldn't stomach the courage to do it. So, I did what any prude, adolescent girl would do. I flaked out. I competently explained to all of my friends that I would never cheat on my boyfriend, especially when he was not part of the game.

The others encouraged me to do it anyway, but I stood strong. They teased me, but the game continued and I had successful gotten out of my first kiss in a truth or dare game. Directly after my turn, my friend was up and she was dared to bring her boyfriend to the woods and kiss him for five minutes.

The two popular lovebirds skipped to the trees and performed their dare happily. This made me feel even worse, but looking back I am glad that I stood up for myself instead of giving in to peer pressure.

If I Kiss, Then You Win

I was about 16 when this story happened and it was by far the best experience I ever had playing truth or dare. We were at my friend Rob’s house and this girl that I liked forever was there. I found out my opportunity to finally kiss this girl.

So me and my buddies devised a plan and we made sure that it would work in my favor. We began playing and every time one of my friends got picked they' dared her to kiss me. She denied me eveytime and each time I tried something new and I failed every time.

So throughout the night I kept asking her why she would not kiss me and received the same answer multiple times. She said “if I kiss you then you win."

I had asked her what that meant and she said that I should know what she was talking about. So I stepped away to use the bathroom and on my way there my buddy asked me if I was going to close the deal.

I explained the situations and he said, “Dude she and her friends are betting that you will get the kiss". She wants to kiss you but doesn't want to lose the bet.

So while in the bathroom a light bulb went off in my head and devised and plan. While we were sitting around the table it was my turn to choose Truth or Dare.

I pointed to her best friend and I dared her to kiss me.

The look on her friend’s face was priceless and her not wanting to lose, she kissed me. I could see how angry this made the girl I had been trying to kiss all night.

So I walk up to her and ask her to take a walk with me so we can talk. As I was about to start talking she kissed me and would not stop. As I am kissing her I am saying to myself wow it worked and while she was kissing me her friend walked by laughing.

I know stood there and was a little confused about the situation. I decided to stop kissing her and ask what was going on. So she sat down and told me the story of what her plans were for the night.

Little did I know that she had no interest in kissing me and the only reason she did was to piss of her friend. She told me that the week before I had kissed a different girl she knew and wanted to get back at her for some other guy they were fight about.

So kinda of annoyed I said why bother kissing me if you have no interest and her response was that everybody knew who was and that I was a great kisser, after all that night I winded up never talking to her again because she used me and year later we ran into each other and she was a lesbian.

Great story and a funny time in my life

Emo Girls Kissing up to Par?

Even for people who don't identify with the stereotype of "Emo," there is often an attraction to the dark hair, pale skin, and individual way of expressing yourself that Emo's have.

When a person identifies as Emo, they subscribe to a stereotype, but one which rejects conventional ideas and values expression of oneself.

Many people simply enjoy the style or look of Emo girls, but others are attracted to the way that they are more up front about issues and concerns. Emo girls may not bother with the pretense of innocence or girliness as it is usually portrayed in western media.

If an Emo girl has a problem, she'll tell you instead of waiting for you to guess it. Having an Emo girl as your girlfriend may be difficult, but at least you know up front what you are getting, and will not later be surprised when your girlfriend has issues.

Let's face it, everyone has issues, so wouldn't you like to know about them up front? If Emo girls are so liberated, one might expect them to make better girlfriends.

This begs the question, are Emo girls kissing guys like you? If they are, is their kissing up to par? There are several Youtube videos which would suggest that Emo kisses are simply hotter than normal ones.

When the characters in "The Notebook" kiss, what makes it better is the pain we know was involved in their relationship. It's the light in a sea of dark.

When we see Emo girls kissing, it's a taste of that; but without the dementia. Is this really the truth? Though countless videos would have us believe that emo girls kissing us would be the best thing that could possibly occur in life, is your everyday average emo girl as great as these youtube superstars? First, let's think of why a person might become Emo.

Wanting to fit into a group, or because of some personal trauma. Neither of these reasons is particularly promising for someone looking to find an experienced kisser.

Videos portray Emo girls as the cool type, with boyfriends or girlfriends, and probably a large circle of friends as well. In reality, this is usually not the case. 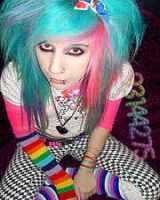 An Emo Girl
(Photo from scene_queenz)

To find this type of girl, you want to target the type who is only in it for the fashion. These girls just like the dark look, and take good care of them. They are unlikely to have the same personal trauma or social inadequacies as a "real" Emo kid.

So when you see Emo girls kissing on youtube, twitter, tumblr, or any of those edgy social networks, stop and think. Is this the socially awkward girl in your algebra class, or is it an overly made-up girl who is just posing at being Emo?

Finally, do you really care?

Emo Girls Kissing – Do You Have a Problem With That?

(Photo from Corey_Shade)
In every girl's life it is essential for her to fit in. They often try to be someone they are not whether if that is how they act, what they wear, and even how they do their hair.

The hardest ages of a girl's life are when she is just able to get into high school and it just worsens as the days go on of them being there. 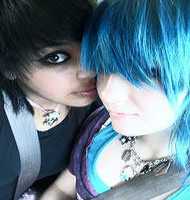 No one really understands how it feels to hurt someone unless it is happening to them. Almost every teen is the victim if not the follower of making fun of others.

People express how they feel in their attire because, that is what gets them noticed. Emo girls are getting more and more numerous all around the world due to the fact that so many girls feel unaccepted.

They are silently screaming for help and demanding the attention that any teenage girl deserves. You will often see Emo girls kissing because, according to the "cliques" description many of them if not most of them have to be bisexual or even lesbians.

Off course this is no parent's greatest wish for their daughters and the sad thing is no one is making the parents aware. Whether if the teenage girls are going through a crisis and wanting the attention sexually because, they feel that's the only way they can get it or if they really are curious of what it feels like to kiss a girl.

Either way a majority of them come to terms with their preferred sex within the next few years. Since emo girls kissing is so common we should take note and figure out what we can do to make it easier. 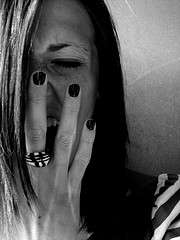 It's often sad that girls are faced with this dilemma of others so they are silently screaming so loudly to get help. Parents need to sit down with these girls and get to where they mind is.

No one is going to understand there teenage daughter, especially with what exactly going on but, if they are not even trying then that only makes the girl feel even more unloved.

It is not fair to be a parent and not take on the parent responsibilities. A parent is to guide their daughter through their insecurities and problems. Not ignore them hoping that they will get out of whatever they are going through on a daily basis.