Tips on Kissing From a 6th Grader Wish I could tell him, how to kiss a girl

When I was in 6th grade, I had a boyfriend named Brent. We met up at the local pizza place with our friends, Mike and Christy, who were boyfriend and girlfriend. After eating, the four of us decided to ride our bikes to the school playground. Mike suggested playing Truth or Dare.

Christy and I were really nervous about playing, but we reluctantly agreed to do so after Christy set up some rules that had us both feeling a little more comfortable. Unfortunately, in her rules there were no tips on kissing. 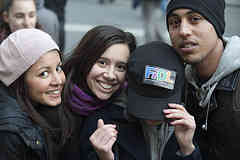 Teenagers hanging out together
(Photo from Frog and Onion)
I didn't really think much about that happening, however, so I wasn't worried. As the game started, Brent dared Mike to kiss Christy. A quick peck seemed to satisfy Mike, and Christy, who probably would have been okay without a kiss, was relieved that it was over.

Clearly, Mike was no Casanova. It was obvious to us all that he'd never been instructed on kissing. Then Mike dared Brent to kiss me. But before Brent could carry out the dare, we saw a couple girls our age biking to the playground.

Like a cat caught up on a counter against strict rules, we panicked.
Luckily, one of the pieces of equipment was a tunnel. The four of us scrambled inside. While I sat blushing and smiling, ready to say something to the group about what to do next, Brent leaned in and kissed me.

The kiss was a disaster.

Mostly completely missing my lips, he kissed my crooked pre-braces teeth. He apparently didn't want to miss the opportunity to kiss me, and instead had terrible timing. While Mike jumped out of the tunnel cheering the disastrous kiss, I continued to blush. 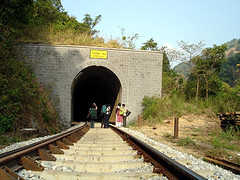 Ever played Truth or Dare
in a Tunnel???
(Photo from Thejaswi)
I was mortified over the entire situation.
I wished I could have given Brent some tips on kissing. I would have told him that it is important to make sure the person he is kissing can tell he's planning on kissing her, first and foremost.

Then I'd tell him to make sure that both she and he are ready for the kiss before going for it all the way. I'd tell him to aim better instead of rushing things because now my memories of my first kiss, while unique, are disappointing.