Just When You Thought It Was Safe to Take the Dare...

Shelle and I were BFF's and had been since we were about six or seven years old. We were probably around 12 or 13 when this game of Truth or Dare took a wrong turn, which at the time horrified me and Matt, but in retrospect was pretty funny.

We'd just gotten into the game big time, having played previously, but never before we'd reached an age where the game had gotten a bit risque for us.

(Photo from alexgowers via Flickr CreativeCommons)
We were playing down in Shelle's basement where we had at least a modicum of privacy in a house with five kids. Having already been chastised once for playing when things had gotten a little boisterous, we'd decided that this out-of-the-way locale would be just the ticket.

Now, Shelle had a massive crush on Matt and had just been dying to get him into a game so that she could get me to dare her to kiss him or him to kiss her - she really didn't care, as long as she'd get that lip-to-lip contact that she'd been dreaming about.

After making me swear I'd never tell that she'd begged me to do this, I gave her my solemn promise to make it happen. What neither she nor I had thought of. Though it was a fact that Tim might just throw a little widget into the works.

We'd found a good secluded corner to hang out in and were sitting on the floor Indian style, taking turns, the game starting with a fairly typical round of folks first choosing Truths because everyone was nervous about taking a dare at the start.

Matt had started the game by asking Shelle what the most embarrassing thing she'd ever had happen to her was and she'd randomly told the story of deciding to slide down the laundry hamper from three stories up when she was about eight years old.

What she hadn't realized was that both her dad and the Sears repair man were down in the basement having a look-see at the dryer, and when she'd landed in the hamper,So, that was a pretty interesting truth and after that, I think we were all inspired to start taking dares.

As a reward for her truth, it was her turn to toss out an option to someone, and I naturally assumed that she would choose me so that I'd have the next opportunity to toss one out and give her the promised dare but for some reason, she offered the choice to Matt instead, who took his turn and then offered a choice up to Tim, which is where everything went askew. 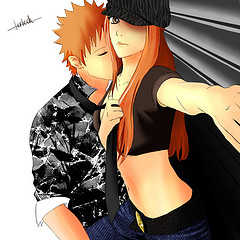 (Photo from suyueinoue)
Tim said I had to kiss Matt, BUT: that "so you won't be shy," you can do "Seven Minutes in Heaven," BUT: so that he and Shelle would know we were "really doing it," we had to make a lot of "smoochy-smoochy" noises.

Matt leaped up immediately, making for the closet door and Shelle gave me the evil eye, mouthing the words "FAKE IT" before I followed Matt and closed the door.

In the darkness of the closet, my heart was actually pounding - this would be my first kiss beyond the playground, and though Shelle never knew it, frankly, I had a little crush on Matt too and was actually thrilled to be in there with him.

Well, it wasn't long at all before that little tiger had me pushed up against the door and was delivering the much anticipated kiss.

I was instantly so caught up, I'd forgotten about the noise, but on the outside, both Tim and Shelle must've had their hot little ears pressed to the other side of the door, as in pretty short order, we heard Tim wrapping on the door - "Hey! I don't hear any noise in there! Are you really doing it?"

At which point, I instantly let out a groan I'd been about to throw out for real anyway, which pretty much instantly resulted in Matt's enthusiastically tossing himself back into the task at hand, which instantly resulted in me learning what it felt like not only to be kissed, but...to know what happened to boys when they got very excited (apparently young Matt liked it noisy).

After a few more seconds, there was more pounding on the door, but this time it was Shelle and she was not asking for noise, she was letting us know that "Ahem - time's up, guys!", clearly upset at what was going on behind that door, though she didn't know the half of it, and never did.

Matt was definitely not interested in drawing our little adventure to a close but after one more very long kiss and lots of moaning, I think he realized he'd be in trouble soon if we didn't stop, so he whispered that he would stop only if I promised we could do this again and soon.

I shook my head and then reached for the doorknob, shocked to find that it wouldn't turn one way or the other. "Hey, you guys! That's not funny - open the door!", I said.

Then Matt followed suit, trying and failing to open the door and demanding that Shelle and Tim stop screwing around out there.

We then heard the knob being jiggled from the other side and the same words were thrown back at us by Shelle - "C'mon, guys - that's not funny - open the door and come out already!"

The sad and humiliating fact of the matter was that no matter what any of us did, we could not get that door to open and in the end, there was only one option; Shelle had to go and find her Dad and ask him to help us, which resulted in a number of things –