(Photo from makelessnoise)
Once when I was in my early twenties, I attended a cosmetic party at a friend's apartment. This may not sound like anything out of the ordinary except for the fact that I'm a guy! I wasn't sure what to expect, but in the end it turned out to be an amusing and embarrassing evening.

I wasn't sure why she wanted me there. Maybe Cyndi knew I was kind of shy around women, and there would be plenty there. She was a stripper and although a few of her friends there had normal jobs, the majority were dancers, groupies or in bands. A few other men were there as well. You guessed it, they were in local bands.

It wasn't a very formal party; people came and went throughout the night. The makeup artist went about her business during the night. The guys were mostly just having their eyes done at their girlfriends urging. They said it would look good on stage. A few did a bit reluctantly, but some passed. More than once I was asked if I was interested and I kept declining. Deep down I was interested, but wanted to appear macho. Later on though, after a few more rum and Cokes I agreed. 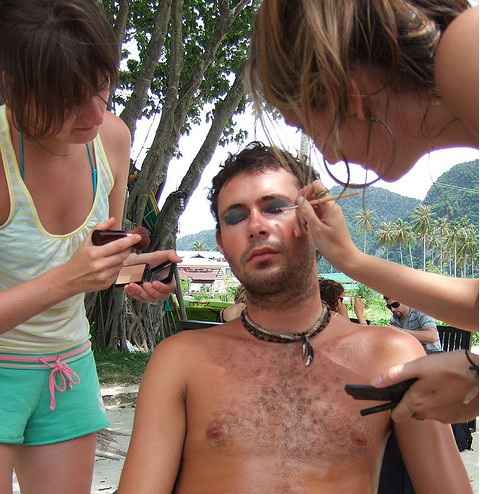 Photo from Joel Vaughan
I thought she would just do my eyes. Boy was I wrong!! Women find me cute. In short, I'm not rugged looking. My face is smooth and semi-effeminate. The cosmetic artist had a field day with foundation, blush, eye liner, some purple eye shadow and even mascara. As a final touch, she applied some metallic pink lipstick and some sparkles on my cheekbones.

What a transformation!! None of the guys really seemed to care and the gals were amazed. I'm pretty sure some of them were jealous. Even though it was a Friday night, it was starting to get late. Some of the people had other places to be and the cosmetics representative was packing up her bags. A few of the girls and a couple guys stayed though.

One woman suggested we play Truth or Dare. Many of the questions were sexually charged, the dares were mostly silly. When it came around to me, I was full of bottle bravado. I was feeling daring! The hostess was the one assigning me the dare. I thought she might just dare me to agree to have a picture taken or knock on a neighbor’s door and wait for them to answer in my makeup. Boy was I wrong! She said, "James, I dare you to dress all the way up as a chick!"

I wanted to decline, but a dare's a dare. She said she'd help me out and we disappeared into her bedroom for about 10 minutes. We went through her closet and dressers. She tossed me a pair of panties and a bra; I put them on while she searched for the rest of my outfit. My cheeks were feeling a little warm.

I guess when I stepped back out into her front room my face would have an even more natural glow!! Next I was putting on a pair of black jeans and a shiny silver top. I thought we were done, but she laughed and went into another drawer. She has quite a collection of wigs. Shouldn't be a surprise, she's a dancer after all. I was going to be a redhead.

When I stepped into the front room, a few people had left. The women who were still there were amazed.

"Ooooh, you're a knockout!"

The guys who had been there were long gone, but there was one man I'm pretty sure was new to the scene.

Soon everyone was leaving; the guy who came late gave Cyndi a kiss and left as well, but she left her door open, she's fairly easy. I figured he must live in the apartment complex and would be returning shortly. Cyndi smiled at me and told me that as ripped as I was, I wasn't going anywhere. In my drunken state I had pretty much forgotten about my current apparel.

She laughed, went into her room, came out with a pair of skimpy PJs and pointed me to her second bedroom. Lying in bed, I heard her neighbor come in the front door. I heard them making a little sexy talk and heard Cyndi tell him she wanted to shower first. I started to doze off after that. Soon, I awoke with a bit of a start. Someone was next to me in bed. Where was I?

A hand was running up my back. I rolled over and saw it was Cyndi’s neighbor; I told him I was a man. He told me he knew that and wasn't bothered by that at all if it didn't bother me. I guess Cyndi kept him waiting too long!! Well, not to be to risqué, let's just say I discovered something about myself playing Truth or Dare that night. I enjoyed the experience and I'll be doing it again.

Cyndi wasn't really mad; there are lots of guys out there. Who knows, maybe she knew something about me that I didn't? Could this have been a setup? If not, I think the result of this game of Truth or Dare might have been more embarrassing for her than it was for me!!

Playing Truth or Dare is often a double-edged sword. The game can promise laughs, but sometimes the laughing will be at your expense.

My name is Paul, I've played many games of Truth or Dare with friends and the most memorable experience was with my friend Ian and my sister.

We lived in Chicago, Illinois. We had been playing the game for an hour or so and the difficulty level was escalating rapidly. I had divulged a few secrets and did a few silly dares. Well, towards the end of our game, it was Ian's turn and he bravely chose "dare".

My sister dared him to try to vomit and then proceed to eat said vomit. The insane thing was that he actually did it! I was entirely disgusted and yet, amazed at the same time.

I gagged a few times throughout the process as I watched him stick his finger down his throat and also as he lapped up a small bit of his throw up. Needless to say, this ruined all of our dinners and I couldn't look at pea soup the same after this.

This event brought about another event that I don't share very often. About a few months after the game of Truth or Dare with Ian, I played again with my sisters.

This time I was dared to dress up like a girl, with make-up and all. I didn't want to do it at first, but they teased me and called me a "chicken". So I ended up letting them dress me up, do my hair and do my make-up.

I laughed hysterically when I saw myself in the mirror because being the scrawny little guy I was, I made for a decent looking "girl". Well, the laughing ended quickly as my Dad, who is very conservative, saw me and was furious.

I never dressed up like a girl again and this was the very last time I played Truth or Dare.