I used to be the assistant manager at an apartment complex. It was a fairly large property, and had a pool right outside our office. Each summer, the management staff would host a pool party for the residents.

It was a huge success every single year. We always had a lot of games to play--some for the grown-ups, and some for the kids. The grown-up games, however, were the most fun and the biggest success. 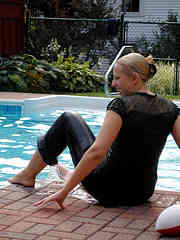 Girl getting out of pool in wet clothes
(Photo from COmfH via Flickr)
Of all the adult games we played, my favorite was the wet clothes relay race. In order to play, you need two teams of two people each. We usually paired up couples on a team to compete against another couple.

Each team got a huge wet shirt and a huge wet pair of jeans. When we said go, the first person on each team had to struggle into the wet t-shirt and wet jeans, dive into the pool, tag the wall, and swim back.

This game created a lot of competition among residents, but also a lot of camaraderie. It was always a lot more fun after teams had a few drinks in them, and as the party moved into full-swing, it was a great game to play in order to get residents together. 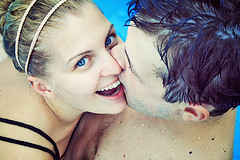 Winning couple
Celebrating Their Victory
(Photo from Aleera* via Flickr)
Everybody would gather around the pool and cheer for their favorite couple as they played, and teams lined up to be the next to compete.

The overall winning team was able to keep the t-shirts and pants, and was able to choose a couple to throw into the pool. And mostly, the winning team got bragging rights, which is all any of them ever really wanted.