When I was in middle school, I had a birthday party. I always played truth or dare rather innocently. Truth was usually who had a crush on whom and dare usually involved eating some random food item or singing a song or something simple like that. 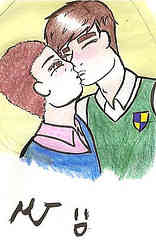 Dare: Kiss your Crush
(Photo from puppycat1)
My friends, on the other hand, got a little bit carried away. I guess when you have ten girls in the house and it gets to be late at night, it happens. Apparently, one friend dared the other to kiss a boy at school.

She had a crush on him, so this seemed a good idea to them, but that is not even the worst part. The worst part is that she actually did it. Two of the girls, I believe, held him while the other girl kissed him.

I am just happy that I am not the one who gave the dare, who did, or was involved in that whole scene. They did not really get into much trouble began they did not mean much harm by it. The principle did give them a talking to though.

That was the first that I ever heard about sexual harassment. It was pretty crazy. They felt kind of bad about it, but now that time has passed, they just think of it as a funny story. 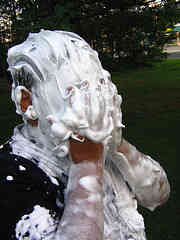 Dare: Put Mayonnaise all over your face
(Photo from *PaysImaginaire*)
I have played truth or dare since then, but none of my friends has ever dared somebody to kiss a boy in the class since then. I am pretty thankful for that. The worst I have ever had to do was get mayonnaise put all over my face.

It was pretty gross, but it was not nearly as embarrassing as what happened to my friends that year at my birthday party.

That's a funny story, but one that I hope is never repeated.