Truth or Bare? Almost got caught naked doing a dare! I was at my buddy Chris's house on a Saturday night and we were having a few too many drinks with two female friends of ours. At some point the girls decided it would be fun to play Truth or Dare. We were a little reluctant, but after a little coaxing from the young ladies we folded.

Like normal, things started out innocent with some light truths as everyone tested out the boundaries of our game. After a few rounds of dares, and an interesting make out session with the two ladies they dared me to strip down to nothing and swim out to a dock in the middle of the pond, stand on the dock uncovered and then swim back to shore. 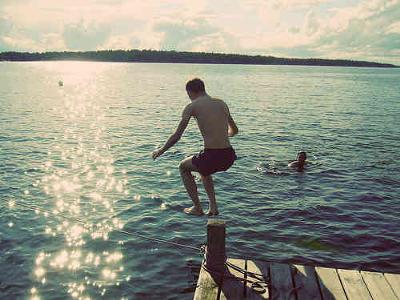 So I stripped down to nothing but my birthday suit and swam out to the dock. As I swam back I heard a lot of laughing coming from shore, but I really did not think too much of it. I finally reached shore and when I looked to grab my clothes they were nowhere to be found. After a few seconds, I looked up and saw one of the girls running back towards the house carrying all of my clothes in her arms.

After a sigh, I ran back towards the house with my manhood in my hands and the girls proceeded to take some pictures with their cell phones. After about five minutes of running all over the yard, begging and pleading they finally returned my clothes to me.

The next day I was talking to Chris and apparently his mother had gotten up in the middle of the night to get a drink of water and looked out the back window only to see my bright white naked backside running around the backyard. After he told her the story, she could do nothing but laugh and shake her head.

Needless to say the next time I went to his house I was a little embarrassed to see her.