A great game to play at a pool party for adults that we play in Charlotte, North Carolina would be what we call "totem pole fight". This game would require at least two guys and two girls. The guys would be on the bottom with a girl on their shoulders, hence the name totem poles. 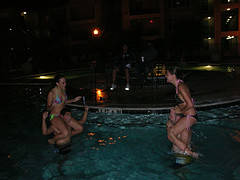 Both couples are ready for a rumble
(Photo from Coy!)
The purpose of the game is to see which team can hold up longest as the girls on the shoulders battle it out. Of course the last standing couple wins. There are alternatives to the fighting portion of the game.

The girls can have props or a device of their choice or what we like to call weapon of choice. This is usually the funniest part because they will have the oddest things to choose from. There weapons of choice are usually pool noodles, floating doughnuts, or something along those lines.

If there is not enough women to participate you can have a guy get on another guys shoulders, but he will have to have some kind of handicap that will make it fair for any women playing for instance he should be blindfolded or hands should be tied.

In cases like this it's important that the game is played in waist to chest high water. You don't want to tie some up in deep water. It's just not the best idea. Ultimately the winners of three consecutive rounds become the king and queen of the water and have the choice to continue fighting or choice one battle they would like to see between the other participants. 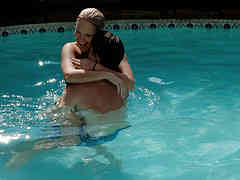 Celeberating their victory
(Photo from kristina sohappy)
The reward for the king and queen can be made up though, just be creative it makes everything a little more interesting. Some people keep tallies because before you know it three hours have gone by and you're having too much fun to keep score.

I really hope you enjoy this.