When I was younger my family and I would always get into all types of shenanigans together. My brother, my cousins, and I were always daring each other to do stupid things. 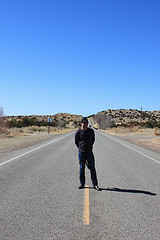 Standing in the middle of a Road
(Photo from The Man in Blue)
One night in particular my cousins dared my brother to let himself be duct taped to a light pole on our suburban street in nothing but his boxers. The dare was that he would have to stay there until someone decided to stop and help him.

My cousins and I watched from the bushes across the street. Eventually two guys in a dark looking truck saw my brother and pulled over next to him.

After pulling the tape away from his mouth, my brother told them an exaggerated story about his friends pulling an elaborate prank on him while he was passed out.

The men went back to their car and pulled out a huge box cutter. I don't know why they had a huge box cutter in the back of their pickup truck, but they did. They cut my brother lose and then invited him to a party they were apparently heading toward. 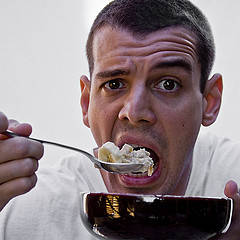 Dare: Eat a full bowl of Cereal
(Photo from Roberto Bouza via Flickr)
My brother turned them down and instead dared my cousins to stand on the side of a busy road in their boxers with signs that read "Honk if you like what you see".

Luckily as the only girl in the group I never had to strip down to my boxers. The worst thing I ever did was finish a large mixing bowl full of cereal in one sitting. Now that we are all out of high school we stopped daring each other to do stupid things.

I guess it was more fun when we were underage and not held accountable for the silly stunts we pulled. Things like... the threat of getting arrested for indecent exposure didn't seem like much of a reason to not strip down to next to nothing and sexually harass drivers via handwritten sign.