Fifth period of my senior year of high school was more of a time for hanging out with my friend's than doing anything else. Especially at the end of the year, we would sit in class and think of games to play since there was no work for us to do. 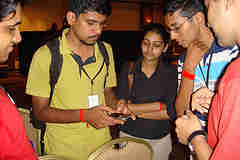 Playing Truth or Dare on their Phone
(Photo from Alagu.)
One day, my friend Rachel tells us that she had just installed a truth or dare app onto her iPhone. With nothing better to do we decided to use it. The app was pretty fun to use even though some of the dares were kind of lame.

But when it got to Bre's turn, she got the interesting dare of having to lick someone's armpit. We all thought this was a pretty good dare, and we let her pick whose armpit she wanted to lick.

She decided on Rachel, who was a bit of a neat freak. So she got at the level to lick Rachel's armpit. When she got her close to within an inch, however, Rachel started freaking out and attempted to push Bre away from her.

We couldn't understand why Rachel could be freaking out so much when she wasn't even the one being dared. We were laughing so hard while Rachel tried to regain her composure. 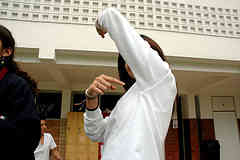 Go on, lick here!
(Photo from phoosh)
Finally she said she was ready and once again Bre stuck out her tongue and inched toward Rachel's armpit. However, when Bre got close, once again Rachel freaked out and grabbed Bre's head, attempting to push her away.

It got to the point where Bre was begging her just to hold still so she could lick her armpit. Finally, with much pain on Rachel's part, Bre was finally able to complete her dare. From that day forward.

whenever we play truth or dare we find it funny to dare Rachel to have her armpit licked instead of daring someone to lick hers, seeing as for some reason it causes Rachel a lot more stress.