Well one cool game you could play at the pool is water gun fights...

Stay in the pool using pool water to reload for nonstop shooting! If you don't have a water gun you can at least soak 'em with the hands...(not very good). Another game is who can stick their heads underwater the longest (don't kill yourself)! If bored and not so spiritual, just lay down and float... float like a boat. 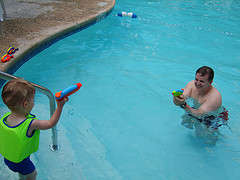 Playing Water Gun Fight
(Photo from smalltownguy22)
Now if you think none of these is a good idea I will give you a few more... and if you still don't then use your imagination!

Do that (throw yourself up in the air shout cowabunga!! in midair and turn yourself into a ball landing into the pool) so like this..

That's all the fun for me in the pool... you know if you fart in the pool bubble will come up (hee hee hee).

Also if you blow under water it'll make bbbrrrrrrbrbrrbrbrbrbrb sound..

by Linda Davis
(Florida, US) The pool-side triathlon is a combination of any three activities that can be done in and around the pool. What I have seen done is a race amongst the participants to beat each-others time - which allows for as many participants as you would like.

You will need a stop watch, a time keeper, a bicycle, a pair of cleaning crew members-as needed, and a floating device such as a raft or tube. 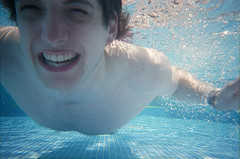 Swimming
(Photo from Ed.ward)
Participants will start at one corner of the pool and will swim freestyle in a clockwise direction along the entire circumference of the pool.

When they have completed a full lap of swimming around the pool, they will get out of the water and cycle around the circumference of the pool at a safe distance away from the edge (the designated cleaning crew will be responsible for keeping that cycling path as dry as possible with towels or old pieces of clothing, or whatever they have to do the job to prevent slips and falls and possible lawsuits).

After one full lap of cycling around the pool, the participants will return in the pool and hand/arm paddle on their way around the circumference of the pool for one lap. 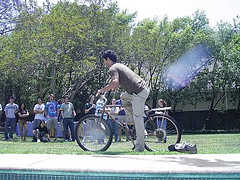 Cycling
(Photo from ascendeddaniel)
The person to complete all three in the shortest time wins a prize. This is a fun competitive, yet entertaining game that allows as many participants as are interested in the game.

It is easy to add your own variations and very inexpensive to perform; and there are no true age limits to get involved however, riding a bike around a pool could be rather dangerous and should only be done by individuals 18 years and older.

All participants should be pre-screened, however, for their ability to swim and ride a bike :) Preparing His Raft for the Competition

The River crossing game is a great pool party game for older children, teens, and adults. All you need for this game is two ropes long enough to reach the entire length of the pool, two rafts, and two teams. The ropes are tied across the length of the pool.

Teams of two are formed, and both teams get on their rafts. When the emcee says "go", the teams have to use the rope to pull their team across the pool. Whichever team gets across the pool first is crowned the winner. 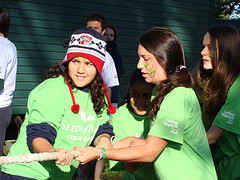 Girls Pulling the rope
(Photo from Seeds_of_Peace)
Here's the catch--if either member of the team falls off the raft into the water, the team must go back to the start point and begin again. The game sounds much easier than it is. It is amazing how many people fall off the raft trying to pull them across the pool.

It is hilarious to watch people tipping off the rafts constantly. This game is great to develop a sense of camaraderie and teamwork. Spectators will have a great time cheering for a favorite team.

The excitement of the players is extremely contagious, as well. Hours will be spent playing this game with almost everybody at the party. This game is not recommended for younger children, as they may become frustrated falling into the pool. 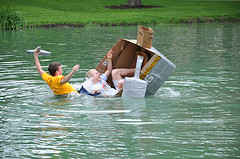 Falling off the raft
(Photo from Elmira College)
It is mostly for older children, around age ten or so, and adults. If you are playing with adults, sturdier rafts may be necessary as opposed to flimsy, inexpensive rafts, in order to make the game more effective.

Regardless, everybody should have a really good time playing this game. It may end up being a staple at every single pool party from now on. Prizes could include the rafts the teams use to win the game.

Otherwise, perhaps a special tropical drink if adults are playing, or a bag of candy or treats for children. Whatever the prize, whoever is playing this game is sure to enjoy the ride!

by Vicki
(California, US) One great adult pool game is Whiffle Ball. Whiffle describes a light, hollow plastic type of ball and bat making this game suitable for the water and your backyard with no chance of breaking any windows. You will need a minimum of four players (two teams, at least two people per team), a Whiffle Ball, a Whiffle Bat and four bases. 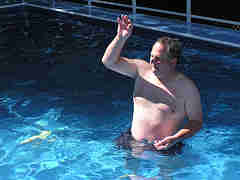 Pool Pitcher Asking for Ball
(Photo from normanack)
With the minimum four players, when on defense, you will always have a pitcher and an outfielder. The pitcher can stand anywhere he or she chooses within the infield, the outfielder starts the play out of the pool, either on the diving board or the edge of the pool so that he/she may jump off to catch fly balls, dive to get into place to cover infield plays, etc.

On offense, you will have batters and base swimmers, if you run out of base swimmers (for example, you're playing two on two and you have a man on first and second), you'll pull the man on second to bat again and have an invisible force runner, meaning you will keep your swimmer on first and the invisible swimmer on second hits his/her bag whenever the first swimmer hits his/her bag). 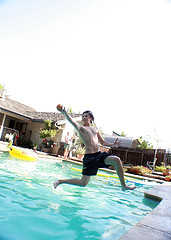 Outfielder Catching the Ball
(Photo from Divine in the Daily)
Most of the regular rules of baseball apply, though you can modify your game for as many players as you have, as many innings as you want, and for your "field". Runs are scored by safely swimming home.

Outs are made by striking out, pop flies caught, force outs, tag outs, and a ball hit out of the pool is an automatic out. As in baseball, there are three outs per side per inning. If you're with a fun, competitive bunch, this game is a blast! You can make modifications to fit your pool, skill level, and quantity of players.

One of our favorite game modifications is to require a beer remain in one hand of all players, making both offense and defense a bit more challenging, especially jumping from the diving board for the ball... Have fun! Party Games for the Swimming Pool

One of the best party games for the swimming pool! This game can be played by all ages. You don't need any equipment! You just need more than Three people to make it as fun as possible! The name of this game is called "Colors".

One person from the group is selected per round and must stand on the opposite end in the pool with their face turned away from the other group players. Each of the remaining group players will then be aligned to either the right or left side of the pool. 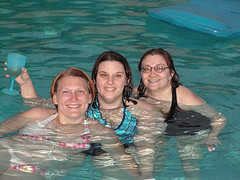 Three persons are enough for this game"
(Photo from LisaRoxy)
Each player will think of a color in their head. The chosen group member will then slowly start to say color names. Once a group member hears the color they chose was called, the objective is for them to make it to the other side of the pool wall without the leader hearing them splash or swim there.

As soon as the leader hears a group member swimming to the other side, he/she has to catch them before they make it there, and the caught group member becomes the leader in the second round.

This party game for the swimming pool it lots of fun and can be played using many categories other than colors. This game can be played and enjoyed for hours as the numbers of categories that can be chosen are endless! Kids especially love this game and trying to swim as quietly as possibly to the other end.

Try it you won't be let down! Hope you enjoy!! I live about Five minutes away from ASU (Arizona State University) in Tempe Arizona. At our apartment complex we throw pool parties all the time. Who doesn't enjoy a relaxing day at the pool on a weekend or day off?

Beer pong probably being the most played game, we also play volleyball, with a net strung across the pool, with approx. 3-6 people on a side that will leave us with something fun to do for a few hours no problem. 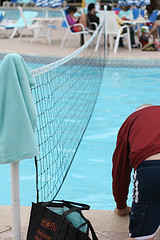 A Volleyball Net
(Photo from chriscoyier)
It's an easy game, almost everybody already knows how to play and it's a fun competitive game that gets everybody involved. We also have a floating beer pong table that is fun to play.

Rules on that are quite simple and relative to where you're playing and who you're playing with. Of course beer and some music get the party started or make the day more enjoyable.

We also have B-BQ food quite often. What's not better than barbecuing some hamburgers and playing some volleyball in the pool?

If you remember the Jenga from back when we were little kids, an easy and fun game. Well we actually blew it up and made it big enough to play next to the pool.

We took a couple of 2x4's and now we have a huge Jenga set that sits about two feet at the start. After we play and finish it, it can get up to about 4-5 feet tall. 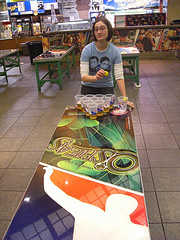 Beer Pong Table
(Photo from Rad Jose)
Brings back memories and is a game most everybody is familiar with. You can even get creative and put some rules on the blocks and say you pull a certain one you could have to take a drink or maybe the direction will just reverse.

I suggest sanding down the edges and wearing some shoes, or at least be quick on your feet.