My girlfriend Anna and I both have always enjoyed playing cards, blackjack and poker especially. It was when we first moved into our first apartment that we found some neighbors that became both our very good friends as well as regulars over to play cards with us.

They were a married couple, Jason and Katherine, who seemed to enjoy cards as much as we did as it was a more intimate activity to do than playing video games or watching a movie. When playing cards you have to concentrate on the others around you and hold up a conversation while doing many other activities you don't pay much attention to others around you. 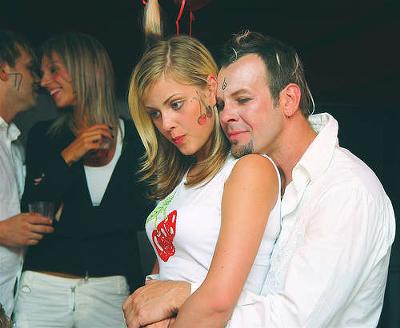 Our new friends did have a bit of a weird side to them, always trying to get us to join them in an even more intimate game with them by spending the night together. That was something that neither Anna nor I wanted to do, but besides that the two were very good friends and was always there for us when we needed them.

It wasn't until one night when they suggested something, most likely in hopes that it would lead to more that we decided to at least give in that much. They wanted to play, a game we were a little wary about at first, but decided it could be fun.

It has to be said that my girlfriend is one of the best players I have ever seen at cards, but up until that night she played down her skills a bit so she wouldn't put off our new friends. I knew within the first two hands she wasn't doing so that night.

By the time the game was nearing an end, she may have lost everything but her bra and panties, the rest of us had almost everything except one article of clothing each. Jason had his boxers, Katherine her panties and myself I had my briefs.

Anna just sat there and smiled saying that she must have been having a lucky night as she finally won the last of our clothes. I'll never forget the looks on Jason and Katherine's faces when they had to hurry back to their own apartment naked, sporting an embarrassed blush that did make them slightly resemble a tomato.

Since that night, we still played cards together though they never again asked us to do anything like strip poker or spend the night together again. Anna and I do laugh about it from time to time though as we never believed that anything could embarrass those two, but we were so wrong.