The highlight of my senior year was a party I went to where I got to enjoy seeing twin sisters kissing. Jamie and Julie were two of the most beautiful girls in my school, and they were identical twins.

Chased after all of the boys in school, they nevertheless stayed single through most of high school.They were teases, and they did not hide that fact.

The day in question was on a Saturday night shortly before Prom. A friend of mine named Steve was having a party. I was not the most social person, but I decided to break out of my comfort zone, and I headed to his house. The party was a typical high-school, parents out of town party. 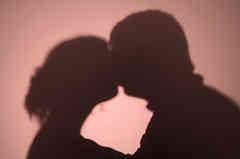 Girl Kissing a Guy
(Photo from Macnolete)
Steve had gotten his older sister to buy him a keg, and other kids brought a variety of beer and wine coolers. People stood around the house drinking, most of them sipping from the same cup all night long, some of them falling down drunk. Most of the action was taking place in the basement.

Steve's basement was set up as a game room/theater. The lights could be dimmed to set the mood. It was down here that the couples hid away to make out, and the wannabes stood on the fringe watching and waiting.

I was upstairs listening to the music and basically hanging by myself, watching the crowd when Steve came up to me. He whispered in my ears. What he said got my immediate attention, and I quickly followed him downstairs. A circle of people were standing around in the middle of the basement.

There were eight people - Steve, me, Jamie, Julie and four others who frankly, I don't remember.I had been invited to play spin the bottle with Jamie and Julie. The game progressed slowly through other people sitting in the circle. The bottle pointed at me only once, but it was a guy.

The rules were clear that two guys or two girls did not have to kiss. The person could spin again, which thankfully the guy did. When it came my turn, I spun the bottle quickly, hoping against hope that it would land on Julie, with whom I had a major crush. Well, as luck would have it, it landed on Jamie.

My teenage hormones quickly dropped Julie and accepted the short, sweet, soft kiss that Jamie planted on me.

Sisters Kissing
(Photo from foto_ch)
It was my first kiss.

As I said, I was not very social. However, as big a moment as that was, the next moment became the most memorable of my high school years. Julie was after me, and she spun the bottle. Her spin was short and jerky, and it landed on her sister Jamie. Everyone expected Julie to spin again, but quickly the two sisters leaned into one another.

They brought their lips close, and they kissed. Their kiss made mine look as tame as it was. They broke apart, and the crowd just sort of stared at them. Nope, it was not my first kiss that I remembered from that party, from my senior year. It was the twin sisters kissing.