Some of my wildest times were in college--or actually, when I was on breaks home from college. My best friend and I went to different colleges, but we planned most of our weekend trips home together, and we made sure to spend as much time as possible during summer breaks together.

I don't think there was a single day over Christmas break or summer break that we didn't see each other. We were inseparable, and often found ourselves doing wild things together--very often when there was little to no alcohol involved.

We stole shopping carts from the parking lot of the grocery store. She would drive her dad's SUV down the highway, and I would be leaning out the window, holding the shopping cart and steering it until we would see sparks flying off the wheels. 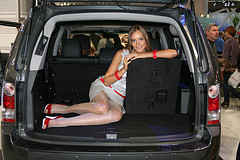 Dares are more funny if performed with such a luxurious car
(Photo from ppz)
We would jump from the moving vehicle all the time. We would find a good, grassy area and then the passenger would prepare to tuck and roll as the vehicle sped up. We did some really foolish things, which we found really funny at the time, but looking back, could have gotten us seriously injured.

Our biggest dare, however, was the night we broke into the public pool. The pool was right along a major highway, so we could have easily been spotted. However, it was no deterrent for us. We were dared to break into the pool and go skinny dipping.

We were not ones to back-down from a challenge, either. We parked behind the pool, undressed and then scaled the fence. We had a wonderful time on that hot summer night swimming and splashing.

I decided to take a few turns on the diving board, too, and managed some great dives. We had a small crowd gathered on the other side of the fence watching us frolic and take the dare by the horns and run with it. The joke ended up being on us, however, we weren't great at the rules of skinny dipping or practical jokes, and in retrospect, we made a very rookie mistake.

We should have waited until we jumped the chain link fence to get undressed. When we decided we had enough of the dare, and we were feeling smug and satisfied with ourselves, and were getting thrilled we had earned a round of beers at the bar, we returned to the place where our clothes were supposed to be, and our friends had taken them and drove off.

Fortunately, we still had the keys to our car, and were able to jump in and drive home without being spotted. However, we did have to miss our round of beers for accomplishing the dare that night. It was certainly worth a good laugh at the time!

Believe me, I will never make THAT mistake ever again!

So I was with my friend (we are both guys) his sister and three of her girl friends. This will end well. My friend told us about a river about a mile away we could get to in the woods. So we walked out there.

One of his sister’s friends was changing into a bathing suit behind a tree then yelled at us we should play. And I knew that she was naked behind that tree so all dares she had in mind couldn't be good.

So first it was just truths about FMK (F*ck merry kill) and who we liked and stuff. But I finally manned up and said dare. So naturally you can guess what my dare was.

Now it was very muddy water and you could barely see under at all. So I hopped in then took off my bathing suit.

It floated down the river but got caught on a rock.

The next dare was for my crush n knew) to get the bathing suit and come give it too me. She got it started slowly coming towards me then they changed the dare.

She had to get naked too.

So then the rest of the girls threw both our bathing suits in a tree.

So here it is. We are in the water butt naked and can't come out because of embarrassment.
However I was hoping she would.

And I got my wish though.

Eventually her dare was to climb the tree and get them.

She came out of the water covering her frontal parts. Everybody saw her from behind. She got our suits and I put mine on.

But her top was cut by her friends so when she put it on it fell off.

I saw her from the front and after I got a mental picture let her wear my shirt to cover up.

Later from more truth or dare I found out she liked me back and I had to kiss her. So it turned put pretty nicely.

Dare: Jump off the dock

Truth or Dare: the adolescents game of mental and physical exploration that allows them to push some boundaries that they might not have crossed yet. Looking back on my own years as a young man, I have some fond memories of that game that still make my smile today.

Then there are some other memories that still embarrass me a little bit as well. One in particular is worth sharing, it might even sound familiar as I'm not sure it's an uncommon situation. It was at church camp at June Lake in California when I was roughly 13 years old.

I had a close group of male friends and this was one of our first years attending the summer camp with the youth group. While it was a church group, none of us was in any way religious, but the idea of getting away from Mom and Dad for a few days was appealing.

When we found out that there would be girls from all over sharing the camp with us, even at the tough age of 13, out interest was sparked further. The first couple days of camp were fairly uneventful as all the kids from different areas took their time going outside their immediate circle of friends.

But after a short while, we all began to make new friends. With the end of camp dance quickly approaching, it was inevitable that some of those new friends were female. Being younger, no one really coupled up, but instead hung around in groups of a few boys and girls.

During the day, we were under close adult supervision. But as the sun went down, the supervision became more difficult and we were able to sneak away more easily. Towards the end of our week long camp, me and my close friends, along with a group of girls we had met at camp managed to sneak away after dinner to the nearby lake.

We found a dock and wandered on out to the end. Naturally, we needed some activity to occupy our group, and what better activity than Truth or Dare? The game started off tame, with a little smooch here and a few embarrassing secrets there, but it wasn't long before clothing had to be removed.

While the "truth" option was great, you were much more likely to get a smooch by taking dare. Eventually, I had to accept a dare that involved disrobing and jumping off the dock. Not being too shy, and wondering where that dare might take me, I briefly hesitated, stripped and jumped in.

As I emerged from the water, I heard giggling, which was to be expected. Then, I heard footsteps and saw my clothing, my friends and those cute girls we met at camp scampering away. The game ended with me running naked down a dirt road trying to catch them before they made it back to camp.

I still smile thinking about that evening, and still enjoy skinny dipping, maybe just because of that.


Photos from Pacopus and Beat Machine

Caught By My Boyfriend, Skinny Dipping

A few years ago, me, my best friend Lily and her friend, Meghan all came over to my house for a sleepover.

We were getting bored after just watching movies so Lily suggested we play truth or Dare.

Everyone agreed. After a few rounds of simple things, Lily asked me "Truth or Dare?" I chose dare.

Lily and Meghan then started whispering about what my dare should be for a good 3 minutes.

Finally Lilly said "I dare you to strip, jump in the pool and stay there for 5 minutes."

So I took off all my clothes and jumped in the pool, while I was in it, Lily took MY phone and used it to invite my boyfriend over!!

He came in about three minutes and I couldn't get out of the pool!

I wanted to hide, but there was nowhere TO hide!

When my boyfriend saw me, I was in shock! I am sooo going to get them back for this.

So I was staying at my friend's beach house for his birthday with 4 of our other friends (all dudes).

We decided that we wanted to go for a swim down at the beach at like mid-day, we stayed there for a couple hours and then we went down to a more private area of the beach where no one goes.

We found a rock to jump off and we’re doing all types of crazy flips. When I was in the water, I look up to see my friend who’s birthday it was. He was standing up on the rock with just his a** out as he jumps off. We all kinda laughed and ended up following him.

We all took off our shorts and were just swimming in our underwear as we were getting more comfortable. Another one of my friends decided it was time to ditch the underwear and jumped off with his hands covering his...

Everyone did the same and we were all jumping off naked with our hands covering so no one really saw anything.

I decided that we should just show each other and then we can just continue to have a great time being free. Everyone agreed and we spent the rest of the holiday being naked around the house, running around naked at night and even sleeping naked (in different beds of course).