My friend Lexi had a sleepover at her house for her birthday. We stayed at her house in Boston,MA and had an interesting time, to say the least. There were about eight girls at her house, and we did all the usual stuff you do at sleepovers; got a pizza, made ice cream, watched movies. 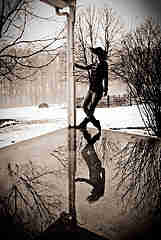 pole dance in snow
Photo from kelsey_lovefusionphoto via flickr
As the night went on, we decided to play truth or dare. The game was relatively boring until Lexi picked dare. Lexi's friend Kristen dared her to run down the street naked to the stop sign and pole dance on it for a minute straight!

It is about 20 degrees out and snowing, not to mention it is about 2am, but Lexi, never to turn down a dare, started stripping. Within a matter of a minute she was running down the street completely naked down to the stop sign!

She did a rather impressive pole dance on the stop sign and then ran back to us and grabbed a blanket. "That was freaking freezing!" she said. It was hilarious to watch! Our snow games didn't stop there either.

Lexi then turned around and asked Kristen if she wanted truth or dare. Kristen, just as ballsy and eager to see what Lexi was going to use as revenge, picked dare. Well, needless to say, Kristen had to do naked snow angels in the snow for 30 seconds straight. 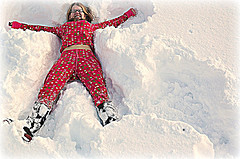 Dare: Do a naked snow angel
(Photo from Evil Erin)
She complained about the cold the ENTIRE time while Lexi sat and giggled at her, telling her that she shouldn't mess with her. Kristen finally got up, and her backside was bright red.

After that we decided that was enough of Truth and Dare in the snow and moved on to other sleepover things.

It was definitely a hilarious and fun night though!