Naked dare in front of boyfriend

So I was at my boyfriends apartment(we were both 19 at the time), and our friends were at his house also. So there were 4 couples in the room, including us. It was getting late, so we all decided to play truth or dare. I only agreed to this because me and Justin have been going out for one year now so I thought it would be ok. 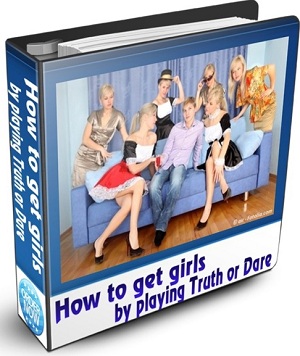 So Justin was up first and he said truth. He needed to tell us if he's ever had sex, and he said no. (btw, Justin is super HOT). Then after a couple turns, I realized that the dares weren't that bad. So I ended up saying dare. I was pretty nervous cuz I didn't want to do anything stupid in front of my boyfriend.

So the dare was: strip completely naked and play the rest of the game naked.

But I had to do it. So I took of my shirt, then shorts, then bra and then underwear. I sware Justin was looking at me the whole time. It was sooo embarrassing because me and Justin have never seen or been naked together yet. After a couple of turns I got used to being naked in front of them and they got used to seeing me naked.

Then it was my turn again and I chose dare cuz I was already naked, and I figured that is the worst that can happen. My boyfriend had to choose the dare for me and that was a little awkward.

He said " I dare you to go to my room with me and have sex with me". So me and him went to his room AND THEN WE WERE ALONE NAKED.

His body is soooo hot and I was soo happy cuz this was our first time. We slept together that night and I sware we kissed in our sleep. When we woke up we were still naked under the cover hugging eachother. It was the best night of my life, all because of truth or dare.