My Friend got out of his senses after Drinking

Drinking Over His Limits 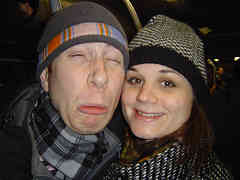 Crying Like a Baby
(Photo from Roadkills Collective)
This happened almost three years before while I was working in a software company. On the occasion of our anniversary celebrations one of our friends Mr. Jones, who was not so used to drinking started drinking and he crossed his limit.

Some of our other friends advised him not to drink more. But he did not listen to him. Of course there were some others to encourage him. He stopped drinking and started narrating his personal stories and at intervals he started weeping.

Everyone enjoyed seeing his behavior as he was a reserved kind of person if not drunk. After sometime he was really crawling. He asked his friend Mr. Joseph to go along with him to the toilet.

Stupid Drunken Behaviour...
(Photo from thefuturistics)
Joseph came out laughing uproariously. Joseph told us that Jones went near the washbasin and he peed there, while our boss was washing his face standing just near him.

I tried restricting him, but he was not paying attention to me. Laughter burst out of all of us.

Few moments thereafter we saw Jones coming out of the toilet with his face looking down.