Girls at a slumber pary

I remember playing Truth Or Dare in my teens and pre-teens (we didn't have the name of teens back then). I also remember the game progressed as we got older. We upped the choices to: Truth, Dare, Double Dare, Promise, or Repeat.

With the promise choice, one had to do a dare, but at a later date. By picking that option, you'd hope the others would forget about it in the morning, and you'd never have to follow through with it. Repeat was also a lame option. One only had to say exactly what the other one said. It usually entailed swear words and/or naming body parts. 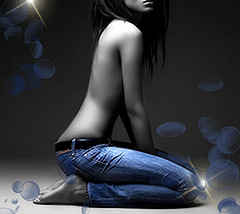 Performing a Half Naked Dare
(Photo from daily sunny)
Anyway, my friends Monica, Christy, and I were all at Beth's house for a slumber party for her 13th Birthday. I don't know why they call it a slumber party; no one sleeps at these things. We did however, play Truth or Dare.

Monica picked the double dare option on one of her turns. Beth told her she was to go around the entire perimeter of the house topless. Not only was she not to have a top on, but no bra either. Imagine my surprise when she actually agreed to do it.

I thought for sure Beth's younger brother Joe would see her. To everyone's surprise, he was upstairs in his room and didn't look out the window. Her parents, on the other hand, were in the living room at the time, and they did look out at the wrong time.

At first, I don't think they fully realized what was happening... I mean, would anyone believe they were really seeing a half-naked person run by the window? People just don't do that in the suburbs. Of course, once they figured it out, we all got in trouble.

It didn't stop us from playing the game, but Monica never picked the double dare option again! Can you blame her?