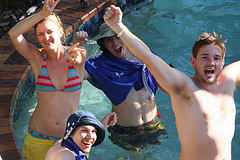 Yelling "Marco"
(Photo from AndyFitz via Flickr)
Marco Polo is likely the most popular pool game ever created, and is simple enough for anyone to pick up on the fly. One person is chosen as being "it", and each time he or she calls out "Marco", the others must yell "Polo!"

The person who is "it" must keep their eyes closed and try to tag another person in the pool. If he or she notices someone getting out of the pool, they can call "fish out of the water", and that person is automatically "it". 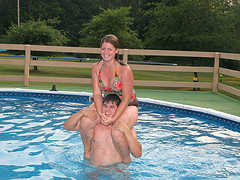 Ready for a Chicken Fight
(Photo from RiverRatt3)
In Chicken, you need at least 4 players, but it can be as many as you want as long as it's an even number. Have all the players pair up, with one sitting on the shoulders of the other.

When the game leader says go, it's every team for themselves. The team's objective is to knock the other teams over. The last pair standing is the winner.

Monkey in the Middle 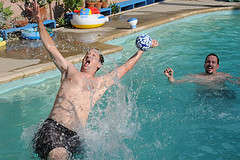 If you are playing with the ball then obviously you won't be throwing above the monkey's head.

You will have to try and swim to the side and throw the ball under the water and get it past the monkey. If you are playing with a ball then you can try and skip it across the water or throw it over their head. (Photo: burge5k)
My friends and I love to play Marco Polo game whenever we are in the pool and bored. It is a great game to play that is suitable for all ages. It is also a great way to pass time. To play the game, you will need to get several people. 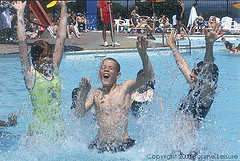 Yelling "Polo"
(Photo: havenholidays)
Everyone needs to get in the swimming pool and spread out from each other. The object of the game is to not get caught by "Polo". To play, basically one person is picked to be "it". That person closes their eyes and get on one side of the swimming pool.

That person counts to 10 slowly and once they reach the count of 10, they yell "MARCO". Everyone else in the pool has to shout "POLO". The person who shouted "MARCO" has to try to catch one of the people that yelled "POLO".

There is a rule that is optional that a person can add to the game. Every time a person yells "MARCO" and the people who are suppose to say: "POLO" actually does not shout "POLO", and the person who yelled "MARCO" realizes that, they can call out the person by name and then that person becomes "it".

It is an actual rule that is optional when playing the game. Most people play with it, however some people do not. Another optional rule is that when the person yells "MARCO", and a person is out of the pool, the one who yells "MARCO" can actually scream "FISH OUT OF THE WATER".

If anyone is out of the water, they become "it". This is a very popular swimming game to play in the pool and it owes it's name to the famous explorer named Marco Polo.

Legends say that Marco often did not know where he was traveling that is where they got the concept of this pool game.