When people made fun of her, Kana would make fun of them... pretty soon, no one made fun anymore. Kana and Jane did everything together. Once, they found a frog and brought it home... Jane's mom was NOT happy about that little incident. 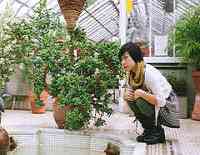 Girl Watching a frog in the Pool
(Photo from flossyflotsam)
Jane found her feelings for Kana growing; she had never been this close to a friend before. One day, Kana was invited to a party, and she invited Jane along. Jane wasn't supposed to go, but she snuck out of the house because Kana asked her to come.

At the party, they were playing a game of spin the bottle. Jane saw for the first time two Japanese girls kissing... she knew she should be grossed out, but she was enthralled.

The kissing girls made her realize that she wanted to kiss Kana. So she convinced Kana to join her in playing spin the bottle. She spun, and watched as the bottle landed on a boy who had a crush on her since the day she moved there. 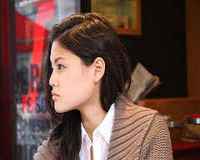 She reluctantly went in, and as he went in for her lips, she presented him with her cheek. The game went on, and Jane saw more Japanese girls kissing, only making her more eager to kiss Kana. Then it was Kana's turn.

Kana spun the bottle... and it landed directly on Jane. Jane's cheeks turned scarlet, and she turned towards Kana. Kana slowly leaned in, and Jane's lips met hers... and lingered, for far longer than they needed to.

Jane smiled. She had finally gotten her wish!