I embarrassed my wife

(Photo from Sarebear:)
Two weeks ago, my wife and I went to Richard's place for dinner. Before we left home, I already had two 650ml bottles of Kingfisher beer.

My wife, Mary is a kind of conservative woman who does not drink and always advocated not to drink. Although I told her that I just had a bottle. She readily believed it was true. We reached Richard's place in about ten minutes. 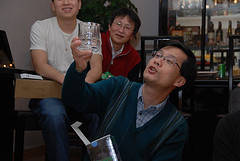 Talking Nonsense after Drinks
(Photo from rocksee)
We started drinking whisky right then. I used to get drunk easily anyway, especially when I cocktailed any drinks, and used to get totally blacked-out. After two or three glasses, whisky did some magic in my brain.

I started to loose my senses. As my sense dwindled - the smooth and rough talking started. I cussed out a lot of words which really embarrassed my wife.

I had never been a lousy talker and always careful with my words no matter if I get drank or not when it comes to our private life. Instead, I picked up some trivial issues and made a scene with my wife!

The worst blunder I did was accusing her of she was being sexually unsatisfied as I got a small one. To her, this was blasphemous and outrageous! Still, our four year old daughter was there with us, staring her papa talking like a stupid man in front of friends! I dozed off and slept straight away in Richard's couch. 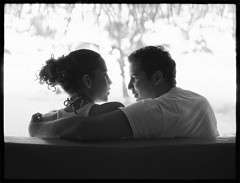 Telling Last Night Incident
(Photo from R_x - renee barron)
Richard then dropped my wife and daughter home. As soon as I woke up at about five in the morning, I realized I was not home and felt extremely unhappy. I left Richard's place instantly for home.

When I reached home, I asked my wife why did she left me at Richard's place. She was in no mood to talk to me. In fact, I was clueless about what had happened the last night, but I thought I could make out from her facial expression.

That was just half the truth! She sermonized me the whole story from alpha to omega; how disgusted she felt about my statement on our private life which was totally baseless and false.

Now I am still making up for my blunder due to drinking by simply not drinking any damn alchohol!