Dare Story: How I Met My Husband About six years ago I was at a party with a few of my friends. We were bored and too intoxicated to leave, so we decided to play Truth or Dare. After a few turns of playing Truth, I decided it was time to have some fun.

When it was my turn, I picked Dare. My friend, Rose, picked out the most weirdest dressed male at the party (and by weirdest dressed, I'm talking multi-coloured floral swim trunks and a blue long-sleeved button-up velvet floral shirt, with combat boots…) and told me I had to go up and hit on him.

Not just "Hey baby, how are you" kind of hitting on him, but literally HIT him. I had to go full-blown crazy. I am probably one of the most timid girls you will ever meet, so for me to do this was a huge step out of my comfort zone.

I was hoping maybe he had been drinking as well, so it wouldn't be AS embarrassing… but of course, I had no such luck. I walk up to this guy, and start slapping his arms… I'm yelling stuff like "I can't believe you slept with her," and "I'm pregnant, this is how you repay me!"

All while slapping him and stomping on his boots! This poor guy had NO idea who I was. After he noticed my friends, nearly dying of laughter, in the corner, he got the hint that we were playing a joke. It turns out, Dean, wasn't that "weird" after all.

He was actually pretty attractive when you got up close and after I explained that we were just playing a game, we hit it off! We started dating about a week after the party and even got married! And on our wedding night, I got to throw out that hideous outfit he had been rockin' the first night we met!

Smelly Pants Were Key For An Amazing Date

It was our first date the guy finally asked me out. After prayers and hoping and hinting it was finally the date with the dream man. A man I wanted to marry. I wanted to jump out of my socks I think I peed my pants a little in excitement.

In preparing for our date I bought a new outfit, I wanted to wear something that I wouldn't normally something that would help me show off my glow. I found that perfect outfit and for the perfect price. I even went into the dressing room to put it on and wear it home.

On my way home I filled my car up with gas. I have filled up my gas tank hundreds of times but for some reason I spilled gas on my brand new pair of pants.

No, I thought, No not today!

Running home I only had minutes before my dream date was going to show up and I smelled like gas.

I tried washing my pants while wearing them in the sink. I finally gave up, since we were going to a demolition derby I figures my pants would blend in with the gas dirt smell of the event. The funny, perfect thing that happened from my spilling gas on my pants was that he loved the smell of gas.

We continued on our date rocking out to the hot rod sound track in the car dancing wiggling and singing along. We stopped for a dinner to take to the derby and then snuggled while watching Transformers. He help my hand and held me, I was on cloud nine.

That's when I knew that this was the perfect date. He was and is the man of my dreams. We are married so the gas on my pants sealed the deal.

How I Met My Korean Boyfriend This story is about how I met my Korean boyfriend for a few years, I lived in South Korea. Koreans love to play drinking games, and Truth or Dare comes up a lot. One of my close friends there was always daring us to do really weird or slightly embarrassing things.

Most of the time, no one would take her up on her offers. One time, we were out at dinner, playing our usual drinking game, and there was a group of guys sitting a few tables away. I noticed that one of them looked like a Korean singer, Jay Park, and I pointed him out to my friend. 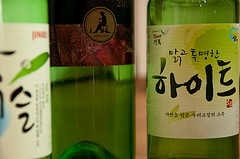 She said: "I dare you to go and ask him if he is Jay Park and get his autograph." I laughed and said I wouldn't. We continued to eat our meal and order another bottle of Soju, a kind of Korean alcohol. Well, after a few more bottles, the dare was brought up again, and money became involved as well.

This time, I accepted. I figured the guys probably didn't even speak English anyway. I walked over to the table and said: "My friend thinks you look like Jay Park. Do you get that a lot?" Turns out, he and his friends did speak English -- but it wasn't Jay Park.

The guy said that he'd never heard that before, but he was flattered, and we started up a conversation. After a few minutes, the group invited my friend and me to keep drinking with them. The group of us drank together for a few more hours and had a great time.

Lots of good conversation and lots of Soju. After we were all suitably drunk, we decided to hit up a noraebang (karaoke in Korean), and the guy even sang a few Jay Park songs for us! Haha. At the end of the night, one of his friends gave me his number.

We ended up dating for a while. Unfortunately, we had to break up when I left Korea. But at least my friend had to give me 20 bucks and we had a good time.

Drunk in a room with my crush

OK, so a bunch of my friends and I (3 girls and 3 guys) we played truth or dare. We got drunk and somewhere along the line I ended up in the guest room with the guy I like in only my underwear and a bra.

And it was really weid.

There is more to this story but I kind of don't remember much of that night because I was drunk.

But I will ask my boyfriend (the guy that was in the room with me). After that night we kinda hooked up after that :)