From Tiny to Turbo

The girl who transformed form tiny to turbo

Back when I was in the 6th grade, I was very tall and flat chested. All other girls my age were already filling out, and unfortunately for me I was not. And of course all the boys noticed things like that. 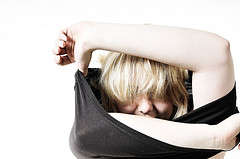 Girl flashing in front of everyone
(Photo from ontwerpplus via flickr)
I was the only teenage girl on my school bus, with several teenage boys, and I was given the nickname Tonya Tiny Tits. Sixth grade ended and miraculously I grew boobs over the summer.

Because of the teasing from the last school year, the boys on the school bus changed my nickname to Tonya Toilet Paper Tits. They believed that I was stuffing my bra with toilet paper because they had teased me so much.

Don't get me wrong I kinda enjoyed the teasing cause it seemed flirtatious to me. I was very proud of my growth over the summer, and I flirted and teased right back and they were so curious to know if they were real or not.

So one day in the back of the bus someone suggested a game of truth or dare. And of course my first dare was to prove that I did not stuff my bra because of the teasing from the previous school season. 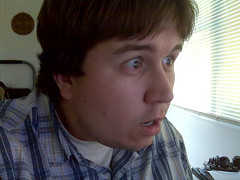 Shocked after being flashed
(Photo from Jonathan Assink)
No one could believe that they had just grown that fast. So I figured that I did have something to prove, and not being shy at all, I flashed them. All their eyes got so big and a new nickname was given to me.

From then on I was Tonya Turbo Tits, because they had Transformed from flat to decent size in just a few months.