Chaos and hedonism at the University of Illinois So it was my sophomore year at the university...my feet were still wet and I had no idea what the hell I was doing at all. One of the first big hobbies, me and the buddies picked up was poker.

We played low stakes no limit Texas Holdem late into the night several times a week. Our story begins on a typical night of poker and good times. We were in Frank's dorm, having a good time. It was a lively game with big wins, big losses, and an overall atmosphere of unpredictability and craziness. 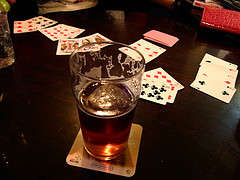 Drinking Card Games are best for such parties
(Photo from robnguyen01)

Anyhow, as the game wore on we became less and less concerned with the cards and more concerned with getting hammered. Metallica was blasting through the stereo and the beer was being guzzled at record pace. Then someone had the bright idea to pull out a bottle of vodka.

I don't remember exactly how it came to this, but someone eventually turned it into a game of truth or dare, and me being the hedonistic stupid I was at the time took the dare, assuming correctly it would lead to trouble.

Well, one of the boys filled a large glass to the brim with straight vodka and dared me to drink it down. Of course I obliged. At first all, I noticed was the incredible burning sensation of the vodka pouring down my throat. 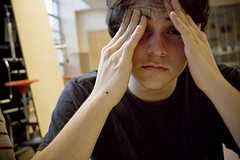 Next day Hangover
(Photo from racheocity)
Soon, though, things went bat shit bonkers. Thirty minutes later I was staggering across the quad with my pants around my ankles, vomiting explosively. I ended up in my shower, fully dressed, and woke up in the morning with a pounding hangover.

The kicker to the story? It was my girlfriend's first night as a university student there. Talk about one hell of a welcoming party! Don't ask me why the hell she stayed with me after that. When I was seventeen, I participated in a trip with some class mates and a teacher (though it was not technically a 'school trip') to Europe. Since we were all teenagers, and in a place where things like alcohol could be purchased by kids our age, and considering the distinct lack of supervision by our teacher, some really interesting things happened.

While staying in Lucerne, Switzerland, we had very few scheduled activities and lots of down time at our beautiful hotel overlooking the lake and out towards the mountains, we had just gotten in from Venice, where our accommodations had been hot, cramped, noisy and smelly, so the beauty and tranquility of Switzerland was incredible to us.

On our first night there, we slept very well, but after a day of lounging, and wandering the local town, we had our energy back, and got bored. Some of us went out to buy beer and wine coolers, while the rest of us fished out cards, set up a table and borrowed a stereo system from the hotel staff.

When everyone got back from the beer run, we drank and listened to music for a while, but most everyone went to bed early anyway. After things had settled to the 'core group' of people sticking around for the long haul, it was just I and five girls hanging out in my room.

We had been playing regular card games earlier, poker, black jack and such, but the girls decided that they weren't satisfied with those kinds of games, and decided to play for each other's clothing. While I was not included in the conversation, I was sitting near them, and mentioned that I would very much like to be a part of the game, this didn't seem to interest them, and they told me to get out.

I countered that it was my room, and they could have their game here not, but they couldn't kick me out, so they decided to let me stay as 'ref' and commentator. By the end of the night, three of the girls wore nothing but sheets, and everyone was drunk. Strip Poker DOES make a great spectator sport. (Photo from Toni Birrer)
One of my favorite memories of college was playing drinking card games. We loved playing cards and we loved drinking beer. We were all underage so getting the beer was the hard part. But we could often manage to get a case or two of cheap beer. An older student or more likely a friend from the town where we lived would get us one when they got theirs.

There was this one place that sold beer brands I never saw before or after. Yellow Dog Beer was one. It had pictures of various hounds on the underside of the cap and it had to be the lightest beer ever, but since we were underage and should not have been drinking in the first place it was perfect for us. 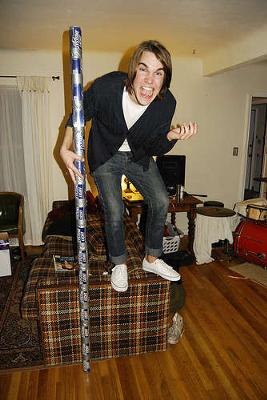 Photo fromhrlndspnks
When we found a willing person of age we would get as many cases as possible. Now of course this so-called beer was not worthy for a real party. For that we would need a nationally known brand. Nobody would get laid by providing "Yellow Dog Beer." Nobody won social prestige for serving what we called "Beagle" at a party, but it was perfect for drinking games in which it was very likely that the participants would puke.

It didn't seem like a waste to send Yellow Dog down the toilet! Plus it was so weak that we could drink a lot of it. If there were two of us we'd play drinking card games like Drink or like a Fish which was basically a drinking version of "Go Fish."

If the two of us knew how to play Gin Rummy we would play Beer Rummy which is basically the same thing but every time you drew from the discard pile you had to take a swig and if you knocked instead of making Gin Rummy (or Beer Rummy as we called it) you would have to down a whole bottle. We definitely did not like knocking.

If we messed up then we would have to take a drink. That didn't get us drunk fast enough so we would play Pinochle at the same time. Any time we made a mistake in either the card game or the talking game we would take a drink of the Beagle. It was amazing how long those games would last.

Playing a drinking card game was definitely my favorite way to while away a boring day or long evening at college.