A game for adult pool parties

The pool party game I am going to describe is called Keller ball. The game is very easy and self-explanatory. I would not recommend this game for children just because there is a higher risk you can get injured or drown than many other pool games.

I and a five of my friends came up with this pool party idea: one day when we were bored and water polo wasn't going to cut it. So we had a ball and we had seven people including one girl who was not going to swim. We decided that we would throw a ball in the pool and chase it whoever got it first would win. 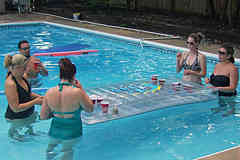 Playing Pool Pong
(Photo from joelogon)
That got boring after about five minutes so we kept trying to brainstorm and come up with an awesome game. Beer pong in the pool was way too over- rated and we did not want to play a stupid game like Marco polo or something in that nature.

The game then turned into we have to jump in and get the ball. Which was very simple, but kept us entertained for about a half hour... Once again we got bored and had to figure out how to make it more interesting.

We had everyone jump from every different corner, but once again the fun lasted only for a short time. We had a couple of close calls with people hitting each other and all decided that it would make it interesting if we hit each other while jumping so we made the space closer that we were jumping so we would all be closer. 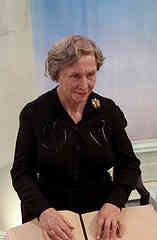 Hellen Keller
Famous deaf and blind educator
(Photo from Arabani)
Then we had to close our eyes to jump in so we would not know if we were about to hit each other. Finally someone came up with the idea of "Keller Ball". The name comes from Helen Keller who could not see or hear.

So we would all have to close our eyes and jump in the pool and try to find the ball without seeing anything or talking. If you got the ball you would have to swim out of the pool while people try to drown you.

So you have to be secretive about if you got the ball. This is why I would not recommend it for kids.

If you want to make it a little more interesting, put a float in the pool and put a beer in the middle. Whoever drinks it first wins. After a couple of rounds it gets interesting.