Well this game is called strip volleyball, it's better to play with at least 4-5 males and females; we played it California Los angels around the summer time at my house. This is an adult pool party game that we usually played at several of our friends pool parties. We didn't think it would be suitable for kids to do. It is basically strip volley ball. 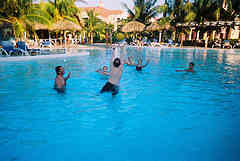 Playing Pool Volleyball
(Photo from ActiveSteve)
When a player scores a point he choose anybody and either have them take a shot or take off one piece of clothing. This would go on until one player has no clothes left at all.

the player with no clothes on is forced to run a lap around the pool in any position we want him/her in. For example, last year we made a girl backward crab walk around the pool...!

Now the only thing that I should warn you about: 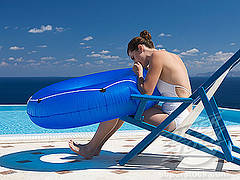 Always take the safety measures before playing such games
(Photo from mimosveta)
For those that do you'll have to be careful for them not to throw up in the pool or get so drunk that they will not be able to continue. What we did usually is to keep shots and a tube by the pool.

They would just have to take one by the pool and nobody would have to get out and have to serve the person a shot.

The name of this game is called strip volleyball it is a fun adult game when no kids or neighbors are around.