(Photo: mumblings of an irate passenger™)

One night, when I was a freshman in college, my neighbors across the hall played a game of drunken strip poker with some friends. Once everyone had removed all of their clothing, they decided to switch things up with a game of naked truth or dare.

My neighbor, Larry, was dared to knock on my door and ask me a question. I knew something interesting was going on in his room since some of my friends were involved, but I was too busy trying to relax with some mind numbing television to care... that is, until there was a knock on my door.

I was lying at the foot of my bed, with my head right at the door, so I simply reached over, turned the knob, and found myself looking up at a very naked Larry.

Now some people in my dorm had a fondness for baking in the buff, but I was pretty sure that he wasn't one of those people.

I decided to have a bit of fun with her and asked, "What kind of cookies are you making?" From that point on we wound up having a two-minute long conversation about snicker doodles and how wonderful they are. 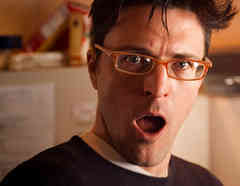 I expected a jawdrop
(Photo from CarbonNYC)
The entire time I was staring straight up from my bed, past Larry's manhood. I later learned from a friend that the truth or dare group had expected some sort of outrageous response from me, at the sight of a naked man at my door.

I guess they forgot that we lived in the last dorm on campus that had true group showers left; after awhile I'd gotten pretty used to seeing random neighbors of mine in their towels or birthday suits, so having Larry show up wasn't all that shocking.

What was a surprise was that my nice quite evening was quite pleasantly interrupted by my neighbor asking for a cup of sugar. Who knew people still did that sort of thing?